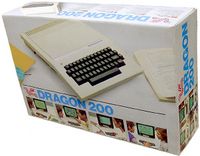 There are rumours, but as yet no evidence, that an expanded version called the Dragon 200E was produced, this was supposed to contain an 80-column display card and may have been similar in specification to the Compusense Dragon Plus add-on.