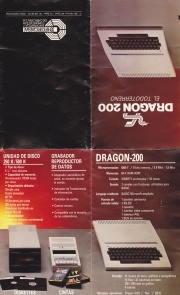 There are rumours, but as yet no evidence, that an expanded version called the Dragon 200E was produced, this was supposed to contain an 80-column display card and may have been similar in specification to the Compusense Dragon Plus add-on.

Again, several mentions in Dragon User but no evidence that it even got to prototype stage - This was supposed to be something similar to the Dragon Alpha/Professional which Eurohard had decided not to continue with and instead concentrated on a Dragon MSX machine.