The Ikon Ultra Drive is a mini-casette drive for the Dragon computers made by Ikon Computer Products.

It's a very compact unit measuring 9.2x11x9.3 cm, made of metal with a black plastic front. It is attached to a cartridge that contains a 6821 PIA chip and a 2532 4KB eprom containing the basic commands for using the drive.

The Ultra Drive inits the mini-cassette with a special file system. The tapes can hold up to 200KB of data and are read and written at 1200 bytes per second.

There were versions of the Ultra Drive advertised for the Acorn Electron, Acorn BBC, Nascom, Oric, Tandy and Commodore computers. 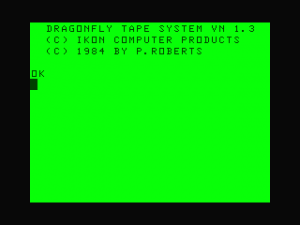 For those of you who are fed up fiddling with the volume controls on your cassette recorder and can't bear the thought of seeing another I/O ERROR message flash up in front of you, Ikon Computer Products may have the answer. Its Ultra Drive is billed as a "reliable, automatic high-speed storage" system at a price only slightly higher than a standard cassette recorder and well below the cost of a disk drive. The Ultra Drive has a read/write speed of 1,200 characters a second (said to be 10 times as fast as a cassette recorder) and a capacity of approximately 200K per cassette. The Drive uses miniature, data certified cassettes (the same size as those used tn a dictaphone). Ikon will guarantee for one year any cassettes purchased from it (though falling short of you stamping on them). Audio quality cassettes can also be used on the Ultra Drive, but David Tucker of Ikon warns that the quality of these, when used with the Drive, is variable. He suggests that "you buy one and test it thoroughly before buying others". The Ultra Drive costs £79.95 inclusive of interface, cables, operating system, micro-cassette and VAT, add £3.45 for p&p. It is available direct from Ikon Computer Products, Kiln Lake, Laugharne, Dyfed SA33 4QE (tel 099-421 515). The cassettes cost £3.36. lkon's products are not available in the shops as they have "dropped retailers in order to keep the price down as low as possible".

From the letters we receive at Dragon User lt is obvious that quite a number of readers spend a lot of their time grappling with cassette recorders trying in vain to load that program that took hours to type in. At last there is a reasonably priced solution - for just £80 you can own an Ikon Ultra Drive. The Ultra Drive is based on a Philip's mini digital cassette recorder, which uses cassettes similar to those used in dictation machines. For your cash you'Il receive the Drive itself, ln a sturdy metal case finished in the same livery as the Dragon 32, the interface cartridge and a manual, plus one blank mini cassette to get you started. The interface is the same size as a standard Dragon cartridge and plugs in as normal, the only difference being the 12 inches of ribbon cable which protrudes out to connect to the drive.

Taking a look inside revealed a very simple circuit board, just a 4k eprom to hold the extensions to Basic, a 6821 PIA (the same chips are used inside the Dragon to control I/O operations), and a few resistors and transistors. Unfortunately, the cartridge is an extremely tight fit; whilst this will certainly prevent any crashes due to bad connections, I wouldn't speculate how long the Dragon's edge connector would stand up to the strain of repeatedly plugging and unplugging the cartridge. All the power for the interface and the drive are taken directly from the computer. There are no extemal controls except for the eject button as all operations are commited by the computer. For example, to rewind a tape in the drive you simply enter the command REWIND. Similarly, to advance (or fast-forward) the tape there is the ADVANCE command. Both of these immediately retum the OK prompt - once the drive has been sent a command it gets on with it on its own. In operation, the Ultra Drive is essentially a fast and very reliable cassette recorder - that is you must position the tape in the correct place to record the next program. (Unlike a disk drive, the Ultra Drive does not do this for you.) There is a SKIP command which acts like the SKlPF command to help position the tape for reading or writing. When loading a file, it is important to make sure that the tape is somewhere before the file or the drive will reach the "End of Files" and give up the search - it will not automatically rewind to carry on looking. There are, thanklully, no I/O errors for starting a tape mid-way through a recording. The first thing to be done on a new tape is to type INIT, which initialises the tape directory and prepares the cassette for recording. Saving and Ioading Basic programs is identical to using the normal cassette, except that "Save" and "Load" are used rather than "Csave" and "Cload". ln addition, if the first character of a filename is "!" the program is saved as a protected file. This means any attempt to read or append the program will result in it autorunning with the break key disabled. Similar commands "Savem", "Loadm" and "Runm" exist for machine code programs. Once you have several files on a tape you may start forgetting where programs are. The DIR command will first rewind the tape and then list each filename on the tape together with the type of file, its length, start and execute addresses. Only the name and type is displayed for a protected file. The area which I thought the Ultra Drive would probably be most useful turned out to be the most disappointing feature - file handling. Although the Dragon's cassette filing system is slow and not very reliable, it is quite sophisticated. Similar commands have not been implemented on the Ultra Drive. There are just two filing commands - SAVED and LOADD. These will save and load whole or chunks of arrays on to the drive. The arrays can be numeric or character, although the manual only mentions numeric arrays. The inclusion of these commands mean that it is not impossible to do file handling programs (such as databases) on the Ultra Drive, but it is certainly not as flexible as the Dragons own COS. In addition to the Ultra Drive commands, there are a few (very easily implemented) additions to Microsoft. These are Break ON and OFF, to disable the Break key; Fast and Slow, which do the same as the high speed poke and so cause some Dragons to crash; and finally, OLD. which will recover a Basic program after it has accidentally been NEWed, provided no new lines have since been entered. l would have preferred to see more useful commands like automatic line numbering and error trapping implemented, rather than these cosmetic commands such as FAST & SLOW.

A first feature which I disliked in the OS was its error handling. Whilst error messages are in nice plain English, such as "No tape" and "End of Files", lf these occur during a program they are printed on the screen, but the program does not stop and there is no error trapping or detection included. This could create chaos in a program which loads arrays from the drive, if the user forgets to put the tape in, or puts the wrong tape in. Although there are features I would like to see improved, the Ultra Drive's good points far outweigh the bad. The system proved to be very reliable in use, has a capacity of 200k per cassette, and is some 10 times faster than a normal cassette. A good quality tape recorder will cost around £40 anyway, so for just £80 the Ultra Drive is very good value for the User who is tired of cassettes, but cannot afford to move up to a disk drive.