The MC6847 is a video display generator (VDG) first introduced by Motorola and used in the Dragon 32, Dragon 64, Dragon 200 and Dragon Alpha. It is a relatively simple display generator compared to other display chips of the time. It is capable of displaying text and graphics contained within a roughly square display matrix 256 pixels wide by 192 lines high. It is capable of displaying 9 colours: black, green, yellow, blue, red, buff (almost-but-not-quite white), cyan, magenta, and orange. The low display resolution is a necessity of using television sets as display monitors. Making the display wider risked cutting off characters due to overscan. Compressing more dots into the display window would easily exceed the resolution of the television and be useless. 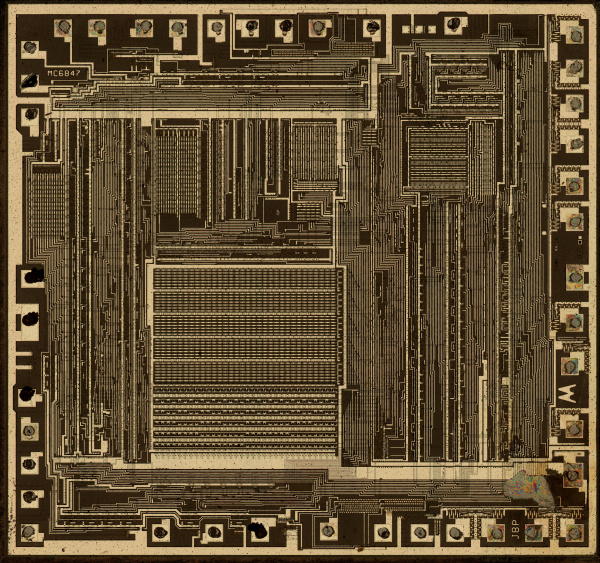 Semigraphics is a hybrid display mode where alphanumerics and chunky block graphics can be mixed together on the same screen. If the 8th bit of the character is set, it is a semigraphics character. If cleared, it is an alphanumeric. When the 8th bit is set, the next three bits determine the colour and last 4 bits determine which "quadrant" of the character box is either the selected colour or black. This is the only mode where it is possible (without sneaky tricks) to display all 9 colours on the screen simultaneously. If used to only display semigraphics, the screen becomes a 64x32 9 colour graphics mode.

The 6847 is capable of a Semigraphics 6 display mode, where two bits select a colour and 6 bits determine which 1/6th of the character box is lit. In this mode only 4 colours are possible but the colour set bit of the VDG can select two different groups of the 4 colours.

By setting the SAM such that it believes it is displaying a full graphics mode, but leaving the VDG in Alphanumeric/Semigraphics 4 mode, it is possible to subdivide the character box into smaller pieces. This creates the "virtual" modes Semigraphics 8, 12, and 24[4]. In these modes it was possible to mix bits and pieces of different text characters as well as Semigraphics 4 characters. These modes were an interesting curiosity but not widely used, as the Semigraphics 24-screen consumed 6144 bytes of memory.

The 256x192 two colour graphics mode uses four colours due to a quirk in the NTSC television system. It is not possible to reliably display 256 dots across the screen due to the limitations of the NTSC signal and the phase relationship between the VDG clock and colour burst frequency. In the first colour set, where green and black dots are available, alternating columns of green and black are not distinct and appear as a muddy green colour. However, when one switches to the white and black colour set, instead of a muddy grey as expected, the result is either red or blue. Reversing the order of the alternating dots will give the opposite colour. In effect this mode becomes a 128x192 4 colour graphics mode where black, red, blue, and white are available. Most games ported from the Tandy CoCo used this mode as the colours available are more useful than the ones provided in the hardware 4 colour modes, however these did not always look that good on a UK PAL TV set.